"Happy Festivus" is the traditional greeting of Festivus, a holiday featured in "The Strike" episode of Seinfeld which first aired on December 18, 1997.

Since then, many people have been inspired by this zany, offbeat holiday and now celebrate Festivus as any other holiday.

The slogan of Festivus is "A Festivus for the rest of us!"

The usual holiday tradition of a tree is manifested in an unadorned aluminum pole, which is in direct contrast to normal holiday materialism.

Those attending Festivus may also participate in the "Airing of Grievances" which is an opportunity to tell others how they have disappointed you in the past year.

This is followed by a Festivus dinner (pretty much your choice)

Also a part is the celebration is the labeling of easily explainable events as "Festivus miracles".

Check out the above video from 'The Strike' episode of Seinfield for the full story...and Happy Festivus! 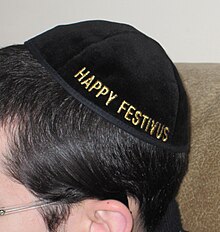 Listen Online 24/7
Sign Up for Our Awesome Newsletter
Filed Under: Festivus Celebration
Categories: News, Videos, Weird News
Comments
Leave A Comment
Back To Top
Top 40: The Most Spun Songs of '19 at Radio Texas, LIVE!